Kathrine:  I always loved to run because running made me feel good about myself, like I could do anything.  I felt fearless.

In 1967, when I was a 20-year old university student I decided to run the Boston Marathon. On the insistence of my coach, I officially registered for the event.  I signed my name as I always do: ‘K.V. Switzer’.  Race organizers probably thought K.V. was a man, and I received bib number 261. There were no rules actually written then saying women were not allowed. I was unusual, but the men in the race were very welcoming and encouraging.

Two kilometers into the race, the press truck passed through the runners and seeing that 261 was very female, they began wildly taking photos.  The race director was on a press vehicle alongside and, infuriated that a woman was running in his race, jumped from the vehicle and attacked me, and tried to pull off my bib numbers.  Luckily for me, my boyfriend knocked the official away instead, and I went on to finish the race.

Despite being scared, I was determined to finish the race no matter what happened, because I now had to prove women could do it and that in any case, we should be allowed to try.  Photos of the incident were splashed around the world.

During the course of the race however, I was both radicalized and inspired.  I knew other women would run if they only had an opportunity. I knew they all had the ability, and I felt responsible to develop the opportunity for them.  Over the next 17 years, I created women’s-only races in 27 countries for thousands of women, and successfully lobbied the International Olympic Committee to include a women’s marathon into the 1984 Los Angeles Olympic Games.

As important as Olympic inclusion was for women, however, most women in the world were still left out of sports and were afraid to participate because they had few role models and nobody showed them how.  They were also afraid of the myths that surrounded women in sports—that they were weak, would hurt themselves, were silly looking, that sports would turn them into men or that they would lose their ability to have children.  These myths still persist today, and prevail in places where women have little access to education.  So I was more determined than ever to reach under-served, insecure and marginalized women who are often restricted by culture, tradition, poverty and ignorance.   But how?

Then, quite spontaneously, my old bib number 261 became a number symbolizing ‘Fearless in the Face of Adversity’.  People began wearing it because running had changed their lives and they felt fearless.  I told this story to my friend Edith Zuschmann, who convinced me that this special number could be the way to change those women’s lives.

Edith:  With this very strong symbol—“261”; and a very cheap and easy method—just putting one foot in front of the other– the non-profit organization “261 Fearless” was born. With a small international team, we created a unique but powerful combination:  a strong educational program united with a global women’s-only club network where women run together and learn to empower themselves.  Running is transformational for women and it also forms the base of courage for her to step outside her comfort zone in other areas of her life.

Education is key for empowerment and is the cornerstone of the 261 Fearless program. Created by highly recognized experts, our program provides the latest knowledge about women’s health, how a woman’s body reacts differently from men’s, and the correct technique to run and stay healthy and uninjured. Women also learn how to network with women from other areas and cultures, how to take on leadership roles, lead a running club and even run a business.

After successful completion of the initial education program, participants create a non-profit group in their own area, which can become a business, called a 261 Club and offer women in their communities running opportunities. Within these safe and secure local social running clubs, women of all ages, sizes, backgrounds and abilities come together and run. The clubs are non-competitive and non-judgmental, but create a big social impact on local communities as all these women come together and accept each other.  Lately, 261 has been reaching out to include refugee women and integrating older women with young mothers. They find rapport and trust and overcome many barriers of communication and isolation.

261 Fearless is a very young organization, but is already in 11 countries.  Success does not come overnight, but with the motto ‘Be Fearless, Be Free, Be Grateful’, this non-profit will grow to benefit many women for many generations. 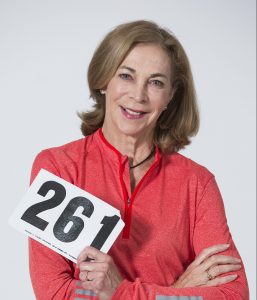 Iconic athlete, author, Emmy-winning broadcaster and social causes advocate, Switzer was the first woman to officially run the Boston Marathon in 1967. She was attacked in the race by an angry official who tried to rip off her bib number (#261) and throw her out of the race because she was a woman. She finished the 26.2-mile distance and went on win the 1974 NY City Marathon and led the drive to make the women’s marathon an official Olympic event in 1984. She founded 261 Fearless, a non-profit that empowers women globally through running. Now 58% of all runners in the USA are women.

Edith Zuschmann is the President, CEO and Co-Founder of 261 Fearless non-profit. She is responsible for all aspects of the organization of the 11-country, 5-continent network of 5,000 women. She has worked as a sports journalist and sports project manager for several outlets.  She is a graduate of the University of Applied Sciences Wiener Neustadt, Austria (where she still lectures on Public Relations and Sports), and is a nationally certified running coach as well as a competitive runner, swimmer and triathlete.  www.261fearless.org

We encourage women everywhere to join 261 Fearless.  Go to www.261fearless.org We are there for HER and to tell her she can.