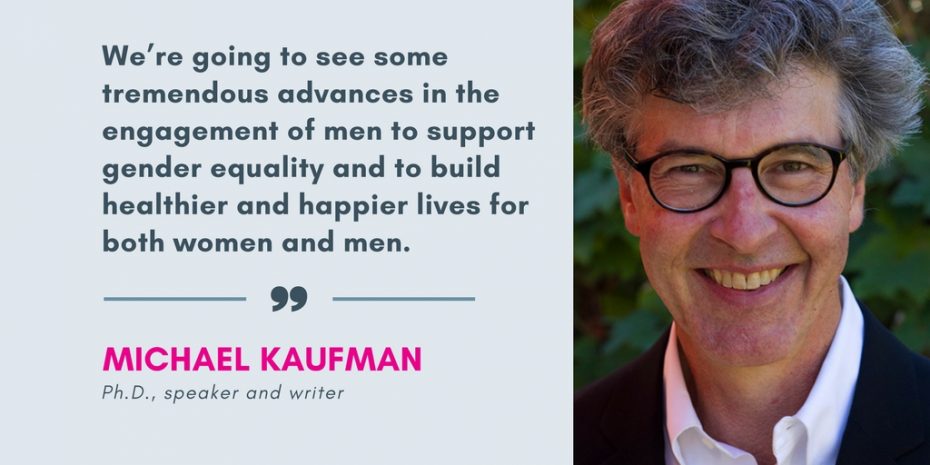 Michael Kaufman, Ph.D., is a speaker and writer focused on engaging men and boys to promote quality between men and women and positively transform the lives of men. Over the past three-and-half decades, he has worked in almost fifty countries, including extensively with the United Nations, numerous governments, corporations, NGOs, women’s organizations, and universities. He is the co-founder of the White Ribbon Campaign, the largest effort in the world of men working to end violence against women. He is a Senior Fellow with Promundo. He is the author or editor of eight books, including two novels. Married with two grown children, Michael lives in Toronto, Canada.  www.michaelkaufman.com   Twitter: @GenderEQ

Recently I was speaking to a vice president of a major bank. He was concerned about the slow pace for the advancement of women in his own company and beyond. He worried about the safety of his daughter who was at university. And he was horrified that some people are trying to roll back the clock on the empowerment of women. He wanted to do something about it. The problem was he felt isolated and simply didn’t know what to do.

I’ve heard similar stories from many men: professional athletes, workers on the shop floor, fathers, young men in university. They are among the hundreds of millions of men who now support women’s rights. But they either don’t realize the importance of speaking out for gender equality or, if they do, they are hesitant to take the first step. Or simply, they don’t know what that first step looks like.

Similarly, after my talks at conferences and meetings, I’m meeting a lot of women who say that the time has come to fully engage men as their allies. Through their courageous efforts, women have made incredible progress in recent decades, but men still hold disproportionate social, economic, and political power. That means that some men can continue to block change. Or, conversely, it can mean that good men can have a big impact. But, many women tell me it’s not clear how they can successfully engage men.

For the past decades, I’ve been arguing that to successfully reach men, we need to take a positive approach. We won’t get far by shaming men or waging a scolding finger. We actually have an evidence base from around the world that says that if we can find positive ways to challenge men and invite men in as allies, we will be more successful.

Part of the trick to doing this is for us to realize two major things.

One is that although we know that men enjoy power and privilege in male-dominated societies, the very nature of privilege is that it is invisible to those that have it.  Furthermore, inequality in power is not only between men and women, it is also among different groups of men (and of course also among women.)  As a result, many men might not realize the many ways they actually do enjoy privilege.

What this means is that we can’t just assume (and can’t just lecture) but must find ways to help men understand the nature of inequality. Yes, we need to challenge men. But we need to do so by making a strong case to men about how their workplaces, their communities, and their families will benefit from equality. And we need to make it personal: that the girls and women they love will be far better off.

The second key concerns the strange reality of men’s lives in male-dominated societies.  When I speak, I tell a lot of stories and provide analysis about what I’ve called the paradox of men’s power. This refers to the strange price that men ourselves pay for the ways we raise boys to be men and set up cultures of men’s power. In other words, although men will lose forms of power and privilege, men actually will benefit from gender equality.  That’s why I talk about healthier, new ideals of manhood.

Again, the evidence base from around the world tells us that campaigns, initiatives, advertising, and programmes that challenge the narrow box we put men into and hold out new ideals of manhood are the most successful approaches. That’s one reason why new laws and programmes to encourage involved  fatherhood are so enthusiastically received by men.

From there we get into the nuts-and-bolts of how to do it.  Here are just a few points:

The world is in a very troubling moment.  But I’m very excited about one thing. In the next few years, in spite of those who wish to roll back the clock, we’re going to see some tremendous advances in the engagement of men to support gender equality and to build healthier and happier lives for both women and men.

Article by Michael Kaufman for the EVE Program