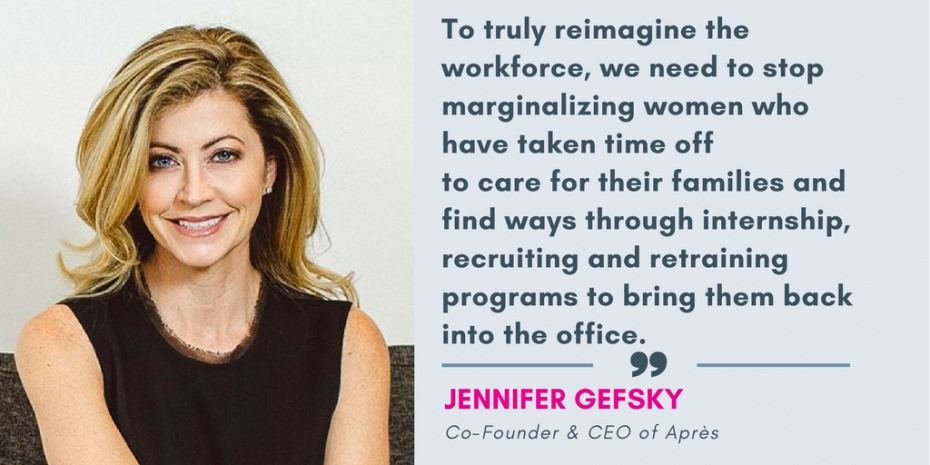 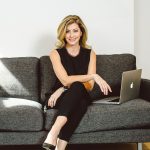 Jennifer Gefsky is Co-Founder & CEO of Après, a digital recruiting platform that connects women looking to return to or transition within the workforce with companies seeking talent and diversity.

In April 2014, weeks before Mother’s Day, the ad agency Mullen Lowe released a powerful video, “World’s Toughest Job,” to highlight the tireless work of moms. Mullen’s brilliant stunt started when they posted a “Director of Operations” position for a fake company called Rehtom, Inc. (mother spelled backwards). The online job listing got 2.7 million impressions but only a paltry 24 applicants – probably because of its brutally impossible job description that included: degrees in medicine, technology, finance and culinary arts, standing up almost all of the time, managing 10 to 15 projects, 135 plus-working hours with no vacation and no salary. However, it did offer “infinite opportunities for personal growth and rewards.”

The reactions from the applicants who interviewed via webcam were captured in the extraordinary video. When one woman heard the insane hours and lack of pay, she asked “is that even legal?” When another asked about a lunch break, the interviewer answered, “You can have lunch, but only after your associate has had their lunch.”

It’s not until the end of the video when it’s revealed that this is a job description for the work mothers do and that the brand behind the video is the card company, American Greetings. The Cannes Lions award-winning ad campaign got people talking and tearing up. It also helped reframe mothers as professionals with job skills that yes, are transferable. But the takeaway was even more obvious – it highlighted how moms don’t get the respect they deserve. For the 85 million moms in America, the video revealed what we already know – the work of care is largely taken for granted. If we’re lucky, the work we do as moms is sometimes appreciated by our spouses and children – perhaps on Mother’s Day with a card. But in the eyes of corporate America, care is unpaid work that is either marginalized or completely ignored. And that is exactly what needs to change.

For the future of work to work for women, we must start putting a premium on care and expecting, accepting and valuing that at some point women (and men) will need to integrate caring for family members into their work life.  And what this means may be different for everyone depending on your children’s ages or your family needs.

Opting out, Opting in and Having it All

The conversation about women leaving the workforce – opting out, opting in and trying to make it all work simultaneously is not a new one. Back in October 26, 2003, Lisa Belkin wrote a controversial New York Times magazine cover story, “The Opt Out Revolution” about a so-called phenomenon where the most educated women in America, hitting their professional stride, were leaving the workforce to stay home with their kids. Belkin profiled eight high-achieving women, who had each left the workforce and seemed to happily surrender to full-time motherhood.

“Why don’t women run the world?” Belkin wrote. “Maybe it’s because they don’t want to.”

The narrative at that time around opting out became framed in personal choices, with little mention of the societal forces and outdated workplace structure that actually pushed many women out of their careers. A decade after Belkin’s “Opt Out Revolution,” Judith Warner revisited those women who left their careers in 2003, in her own New York Times piece, “The Opt-Out Generation Wants Back In.” What Warner found was that some of the women, who ten years earlier felt empowered to drop out, were now regretting their choices. One who gave up her high paying job at Oracle to stay home in her big house to care for her three kids, was now divorced, living in a rental apartment across from a supermarket and making 20% of her former salary.  Many of these women had believed that their degrees were their insurance policies and when they were ready – if they wanted to – they could jump back into the workforce and pick up where they left off.

The reality, however, was much grimmer. Studies show that nearly 90 percent of moms who take time off from paid work will re-enter the workforce but only 40% will find the full-time, satisfying work they want. There is a huge motherhood penalty – one that is as unfair as it is harmful to the economy. Losing female talent is costing businesses that are desperate for diversity and desperate for more women at the top. This is not just about optics, it’s about the bottom line. More women in high level positions is good for business. Study after study shows this to be true.

I know this well. After twelve years working as an attorney, first for a prestigious law firm and then for seven years at Major League Baseball, I left the workforce. I never imagined I would. After I had my first child, I returned fulltime to work two and a half months later. Skip ahead eighteen months and I was pregnant again. This time my pregnancy and maternity leave was tougher. I also had a more senior and demanding position as a vice president at MLB representing the organization. The daily commuting and frequent travel, together with my husband’s own intense work schedule meant that something had to give and that something was me. I quit. I wasn’t thinking about my professional future; I was thinking about how I was going to get through the next day.

The truth is I loved my first year at home. I could breathe again. I enjoyed my children and my life. I was thrilled to have shed the stress of trying to make it all work and be everything to everyone. And then a few years later I got pregnant for a third time. When my youngest was born I was now seriously itching to get back to work but at a loss with how to get back in. The people who used to work for me had now surpassed me in my career. Would I ever work again?

By conservative estimates there are at least three million professional women who are trying to re-enter the workforce. And the good news is that the workforce is showing positive signs of wanting to fold these women back in. But the reality of bringing women back onboard and making sure they don’t completely leave in the first place is still quite thorny.

So how do we change the workforce so women can work and care for their families? How do we enable women to take time out, if they want and need to, and then have them fully re-enter without being severely penalized?

First, we need to rethink workable hours for women – particularly those with young children. The 9 to 5 workweek is a remnant of the Industrial Revolution. It’s about as relevant today as the Ford’s Model T and yet, coincidentally that standard 40-hour workweek was codified by Ford Motor in 1914 and continues to be the norm.

The good news for women is that as Millennials take over as the largest segment of the workforce they are helping to redefine how we work, where we work and even how many hours we work each day. A study by Bentley University found that 77 percent of Millennials feel a flexible work schedule allows them to be more productive. And in the throes of the creative economy that values an entrepreneurial workforce where project-based and freelance work is becoming routine, we are reimagining what the culture of work looks like and how we operate.

Susan Dominus writes in her smart New York Times piece “Re-thinking The Work-Life Equation” that in order to create real change, we need to first change the language in the workplace. Instead of talking about “balance” as we’ve done for the past dozen years when Lisa Belkin’s New York Times’ ran, we need to reframe it as a “work-life fit.”  Apparently, The American Psychological Association and the Society for Human Resource Management have already started using this term as well. The phrase also removes gender from the conversation and doesn’t suggest “family” or “kids.” And being gender neutral is exactly how this needs to be perceived on a corporate level to increase flexibility for everyone – the men too. Studies show that creating a culture that doesn’t make flexibility either a perk for moms or an accommodation for a few, but instead having it blend into the rhythm of a workplace, helps enhance performance and increase employee satisfaction. It also takes the guilt and stress out of managing work and life – particularly for women.

To truly reimagine the workforce, we need to stop marginalizing women who have taken time off to care for their families and find ways through internship, recruiting and retraining programs to bring them back into the office. Or better yet – we can find ways for women to work that doesn’t always require face time in an office.

This new workforce understands that women may plot their career progression knowing that they will want to be stepping out for a few years but have the support internally to plan and prepare for that transition. It creates a space where “work-life fit” is embedded into the corporate culture. It can keep women in the workplace so companies don’t lose its female talent – talent in which they have already invested and in which they need to continue to nurture. This model supports female diversity not just at the bottom but in middle management and at the top of the food chain that is so frustratingly lacking in many industries. And ultimately this re-imagined more flexible environment creates a sustainable and profitable workplace that will be a win-win for everyone.

By Jennifer Gefsky, co-founder Après, for the EVE webmagazine

A version of this article appeared originally on Après, a career resource for women returning to the workforce, and is re-posted here with permission