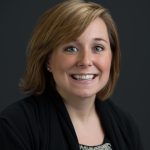 Professor, consultant, and non-profit board member, Dr. Katina Sawyer serves as an Assistant Professor of Psychology at Villanova University, as well as owner and operator of K. Sawyer Solutions, LLC. Her research focuses on diversity, work-life balance and leadership and has been published in major peer-reviewed journals, such as the Journal of Applied Psychology, as well as the Harvard Business Review. Similarly, her consulting work focuses on organizational effectiveness, executive coaching, and diversity and inclusion. She holds a Ph.D. in Industrial-Organizational Psychology and in Women’s Studies from The Pennsylvania State University.

Globally, women’s leadership has become a hot topic in organizations over the past couple of decades. However, while women are now entering leadership positions within middle management at the same rate as men, gender parity has not yet been achieved at upper echelons of organizations. In fact, women are highly underrepresented at the C-level and on Boards of Directors, despite the fact that women are currently outpacing men with regard to education. Given the lack of gender equity at the top of organizations, a key question emerges: Have organizational strategies for increasing women’s leadership been effective? While gender initiatives at work have certainly contributed to positive strides in closing the gender gap, I believe that we could be doing more.

Many of the women’s leadership initiatives that workplaces have enacted so far focus on developing women’s skills and leadership potential. While this focus on developing skills for women addresses some key gender gaps (for example, the fact that women may have been less likely to receive this guidance in the past, compared to their male counterparts), it still positions women as key drivers of gender equality. Further, women’s leadership training also takes a bottom-up approach. While this has some positive benefits (i.e., women don’t have to rely on others to begin creating change), it doesn’t require change and support from the top of the organization. By neglecting to drive gender equality from the top, women are essentially trained on how to best navigate a hostile workplace, without a simultaneous focus on changing the culture surrounding gender. Overall, training women to develop their skills in order to be perceived more positively at work, doesn’t change the fact that bias exists and doesn’t protect other women in the organization from being systematically passed over for opportunities.

So, what strategies might work better to accelerate gender parity at work? While I would not advocate for eliminating women’s leadership programs (as I mentioned before, I believe that they are helpful in many ways), I would advocate for the creation of another stream of programming which focuses on engaging male champions for gender inclusivity at work. But, what is a male champion? A male champion is a high-ranking male leader who enacts best practices in mentoring while at the same time leveraging an “ally mentality”. In other words, a male champion works to support talented female leaders but also recognizes and combats bias that they might face along the way.  Luckily, through my ongoing work with co-author Anna Marie Valerio (Executive Leadership Strategies, LLC), we have found that there are already men in high-ranking positions across industries who are enacting male champion behaviors.

However, until male champions become more commonplace, the majority of males may remain unwilling to enact champion behaviors at work. Thus, we believe that locating male champions at work, understanding the behaviors that are driving their effectiveness and promoting those behaviors through role-modeling, could truly transform gendered culture in organizations. But, how can organizations get started?

First, locating male champions may seem difficult, but we have found that finding role-models for male champion behavior is fairly simple – you have to start with successful females. Most successful females that we spoke with could remember a male champion that they had worked with who really had a positive impact on their career. While asking males to self-identify might seem logical, we have not found it to be an effective strategy. Some men believe they are effective champions and they are not – and other males were unaware that females viewed them as champions, but were enacting effective champion behaviors nonetheless. Thus, starting with the female leaders as the starting point for locating male champions is a great first step to understanding how to encourage other males to begin enacting champion behaviors.

Finally, asking the male champions you have located to serve on a panel about supporting gender inclusive leadership can help to make their actions more visible and encourage role-modeling of these behaviors on a broader scale. Training other males to enact these champion behaviors may also prove beneficial in systematically promoting gender inclusivity.

In all, while providing women with development opportunities might address certain aspects of gender inequality at work, it leaves a big opportunity on the table. Engaging males in truly supporting women’s leadership has the potential to greatly transform organizations from the top down.

Article by Katina Sawyer for the EVE Program