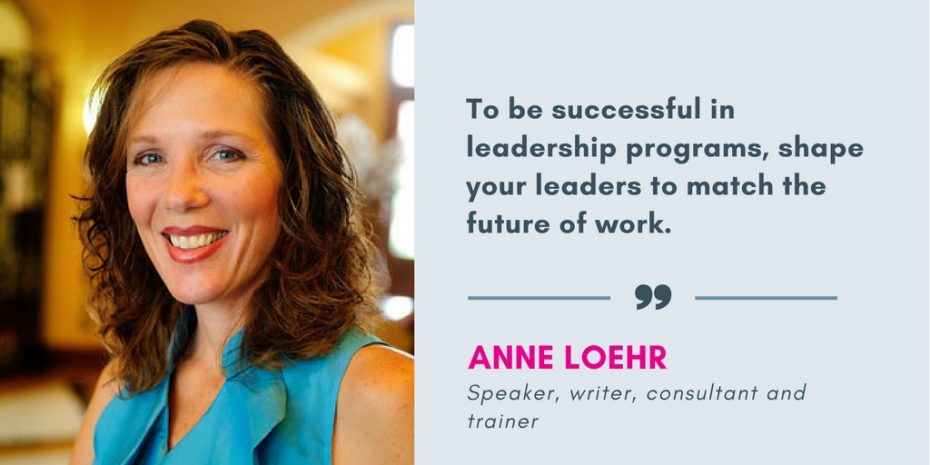 Anne Loehr is an internationally sought after keynote speaker, writer, consultant, and trainer. She helps leaders in large organizations connect today’s everyday decisions to the future workplace. Her end goal is to help organizations retain their top talent and not only survive, but thrive. To learn more about Anne, check out www.anneloehr.com or follow her on Twitter.

There is a disconnect between the future of work and what women’s leadership programs purport to do—develop our future female leaders.

Let’s start by looking at a real description of a women’s leadership program currently offered at a large corporation: “High-potential women executives will be equipped with the knowledge and tools needed to elevate themselves to the C-suite and beyond.”

This description uses language which reflects two outdated assumptions about leadership. First, that hierarchy is a given. And second, that “moving up” is valued by all women leaders.

Leadership programs that use both of these common assumptions point to a larger issue: non-inclusive language.

Using forward-focused assumptions and inclusive language will make leadership development programs more successful for both individuals and organizations. So let’s take a closer look at these assumptions.

Leadership Programs Assume Hierarchy Is a Given

The future of work will be stripped of centralization. Instead of ladders and chains of command, the future organization will function like an ecosystem — a community of interconnected organisms that all work in conjunction with each other in a complex environment, where members play many roles.

Instead of a centralized, hierarchal company, we will have a holacracy, where authority and decision-making doesn’t travel from top to bottom. Instead, governance will come from self-organizing teams with a shared leadership model. We’re talking no job titles, no managers, no hierarchy, and most importantly — no need to ask permission from a higher-up. You can see the problem here: How can you develop future leaders by focusing on moving up, when in the future, career movement doesn’t even have an “up?”

In the US, flexibility ranked as one of the most important factors when looking for a new job or deciding what company to work for. If women — and men — value work flexibility, using old workplace assumptions will no longer work.

Working 80 hours a week, in a bricks and mortar office, was the accepted norm for moving into past leadership roles. No longer. The amount of people who work at home has grown by 103% since 2005, with 3.7 million employees now working from home at least part of the time. Even more telling is that the employee population as a whole grew by 1.9% from 2013 to 2014, while the population of employees who telecommute grew 5.6%. With technology, we can work anywhere, and stay connected even when we’re not physically sharing space. This type of freedom is shaping the future of work, and future leaders will be part of the continuation of that shift.

What Does Language Have to Do With It?

In an attempt to keep women’s leadership development programs inclusive to women, organizations end up doing the opposite, by signifying what types of men are invited to join. For example, I’ve seen women’s leadership programs offer a place for men “who get it’. If we only invite men “who get it”, what does that say about other men? That they aren’t sophisticated, informed, or wise? This creates a divide between those who are invited to the leadership space, and those who are not.

Even women experience a lack of inclusivity into programs supposedly developed just for them. The language often used to describe future leaders is ‘high potentials’, ‘emerging leaders’, or ‘next gen’ leaders. All of this assumes that the future leaders are young and focused on being leaders early in their career.

This type of line drawn in the sand, where the potential leaders are on one side, and the “regular” people are on the other side, starts early. My daughter’s elementary school separates children into gifted programs starting in third grade. That’s quite young to feel that some people have high potential and others do not. That designation can define a child as they develop. “I’ll never be a leader,” might be a decision a third grader makes just because she wasn’t invited into the gifted program—a decision she takes along with her well into the development of her career.

So What’s the Solution?

Organizations must take a closer look at leadership programs to identify what assumptions their programs are based on. Here are three easy steps to do so:

The reality is, who you invite to participate in leadership solutions and the language you use to frame those problems is itself shaping the future leaders. To be successful in leadership programs, shape your leaders to match the future of work.

Article by Anne Loehr for the EVE Program