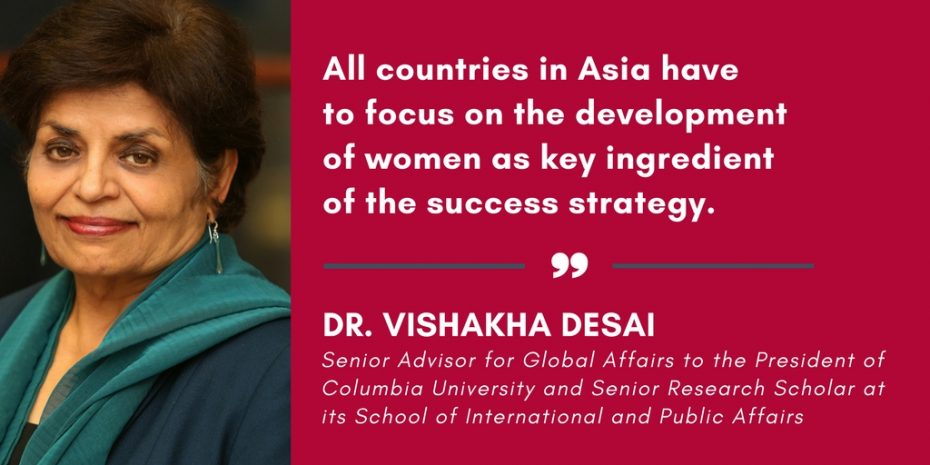 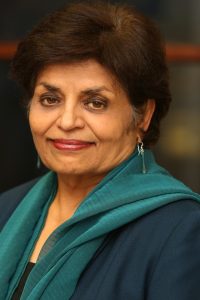 Dr. Vishakha Desai is Senior Advisor for Global Affairs to the President of Columbia University and Senior Research Scholar at its School of International and Public Affairs. From 1990 through 2012, Dr. Desai served in various capacities at the Asia Society, ranging from being Director if its museum, to being the President and CEO of the organization from 2004.  As President of the Society, Dr. Desai developed an innovative program on “Women Leaders of New Asia” that explored the issues of policy and cultural attitudes throughout the region.  A noted scholar of Asian Art, Dr. Desai is well known for her leadership in presenting contemporary Asian art to American audiences and in developing innovative approaches to the relationship between culture and foreign policy in Asia.  In addition to several publications, Dr. Desai is also a frequent contributor to newspapers and magazines in both the US and Asia. A recipient of five honorary degrees, Dr. Desai holds a B.A. in Political Science from Bombay University and an M.A. and Ph.D. in Asian Art History from the University of Michigan.

It is now an accepted fact that rise of Asia, led by China, is one of the most important features of the twenty first century. After some two hundred and fifty years of Euro-American domination of the world, millennial civilizations of Asia-China, India, Japan, Korea and the regions of southeast Asia—are ready to create a new power base through their economic might and their population strength. And yet, this dazzling economic growth and the demographic strength of the region is also mired in problems of inequality, endemic poverty and long term environmental degradation.  To solve these intractable problems, Asia, particularly the big countries such as China and India, needs all the talents it can muster to mitigate against the challenges and to maximize benefit for all that emerge from the economic growth. It is crucial that to be fully developed societies, all countries in Asia have to focus on the development of women as key ingredient of the success strategy.

It has been pointed out by numerous scholars that women’s empowerment and gender equality are effective means to combat poverty, hunger and decease and to generate truly sustainable development. The business case for inclusion of more women at the top is also evident. McKinsey reports point out that companies with significant numbers of top female managers not only perform better in the case of short term profits but also in innovation.

Despite ample evidence to the contrary, major countries in Asia, especially China and India, continue to lag in their promotion of women as business, political, or social leaders. The 2016 Gender Gap Report, a project of the World Economic Forum, points out that despite huge strides in education,  India and China rank poorly; China with its overall ranking at 91 out of 145, and India at 108 out of the same 145 participants from around the world. In the category of economic participation, China has consistently moved forward, but it still ranks 81 and India is at pathetic 139 (partly because most of the women in the work place in India are in the informal sector and GGR doesn’t include that in its computation.) While India does well in the political participation ( ranked 9 vs. China at 73), and China does relatively well in the area of educational empowerment (ranked 30vs. India at 125), both countries fare miserably in the arena of health and survival rates (India at 143 and China at 145, at the very bottom of the list). This last index is particularly striking as it indicates extremely abnormal childhood sex ratio with a strong preference for a male child over a girl, resulting in selective abortion of female fetuses.

How do we account for these relatively poor records of treatment of women in the two biggest countries of Asia when we also read about strong Asian women leaders who routinely show up in the Forbes’ “the World’s 100 Most Powerful Women” list? I am routinely asked by friends and colleagues in the West that they are surprised by the high level of senior female executives in India. A large majority of major banks in India, both domestic and international, are led by women, for example.  Similarly, South Asia has had female leaders of state for more than four decades. In China as well, there are increasing numbers of female senior managers in public and private companies. One way to understand this dichotomy is that the leaders are the exception that proves the rule. Many of the female political leaders got to their position because of their family connections, as daughters, wives, and widows of popular male political leaders. Many of the strong women business leaders have had strong male mentors who promoted them, breaking traditional norms of patriarchy.

Some significant exceptions notwithstanding, it is evident that if Asia as a region is to fulfill its potential as the new global player, and it must utilize the potential power of women in the economy by creating policies that support their unique needs. Most importantly, it must recognize that the harder work of changing social norms that continue to prefer boys over girls needs to be tackled head on.

Article by Dr. Vishakha Desai for the EVE Program