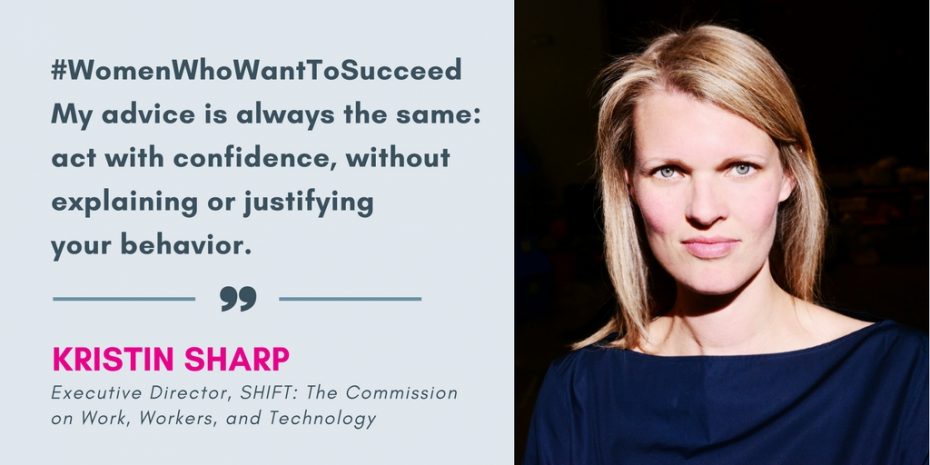 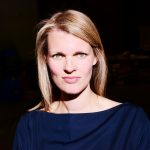 Kristin Sharp is the executive director of New America and Bloomberg’s joint initiative, SHIFT: The Commission on Work, Workers, and Technology.
Prior to launching SHIFT, she had an extensive career in technology, innovation, and national security policy in the U.S. Senate, most recently serving as deputy chief of staff to Sen. Mark Warner (D-Va.), and the architect of his initiative examining the impact of the on-demand economy and contingent workforce on capitalism.

In the Senate, Sharp also held positions as legislative director for Sens. Mark Pryor (D-Ark.) and Amy Klobuchar (D-Minn.). In addition, she held a variety of senior staff roles on the Senate Homeland Security and Governmental Affairs Committee and was an advisor to Sen. Richard Lugar (R-Ind.) on the Senate Foreign Relations Committee.

In addition to her work with New America/Bloomberg, she is a frequent speaker on the future of work and consults for a variety of private start-ups. Sharp is a member of the board of the Herbert Scoville Peace Fellowship. She has an M.A. from Duke University in Political Science, and a B.A. from the University of Michigan.

As Executive Director of the Shift Commission and former senior staff to US Senate leadership, I’m often asked for my advice to women who want to succeed in political, policy, or technology fields. My advice is always the same: act with confidence, without explaining or justifying your behavior. Technological progress and new ways of working make it easier than ever to do so.

Women in general, and younger women in particular, often underestimate themselves in seeking out new opportunities. First, in looking for new positions, we try to measure up to an imaginary perfect standard we think employers or others in their field want to see. This was highlighted concretely in a 2014 internal study by HP showing that women wanted to have 100% of the qualifications listed on a job posting in order to feel comfortable applying while men felt confident applying with just 60%. Waiting for 100% lets the perfect be the enemy of the good. In truth, employers know that most candidates don’t have all of the necessary strengths for a job; as an employer you look for the candidate with the best combination of strengths for a role. Often, a number of different combinations can fit the bill. Instead of worrying about the ways in which we don’t measure up, women should focus on going into an interview having thought carefully about how to shape the role – having used the plethora of on-line job aggregators and skills matching/training companies to examine the data about the field and industry. Having a well-defined and confidently articulated perspective on how to add value in a job will sometimes align with the interviewer’s vision for the position and sometimes not, but it will almost always make you stand out from the crowd.

Second, once women land a job, they often report feeling pressure to “be nice.” This manifests in not negotiating their salaries (because it appears ungrateful for the opportunity or starts off on the wrong foot), not speaking up in meetings (for fear of seeming uninformed), and in waiting for superiors to notice they’re doing a good job and give them more responsibility rather than directly asking for a promotion. In doing so, we’re operating under the constraints of an old work world – the one that viewed carrying out an assignment well as evidence of high performance. The work world of the 21st Century economy isn’t based on perfectly implementing someone else’s ideas. It’s based on identifying what needs to happen and seeking out the funding, mentors, and strategy to achieve it.

Third, women explain their actions more than men do. I’ve often sat in meetings with very smart and accomplished women who start with “I haven’t had a lot of experience in this topic, but …” and then make a statement. Doing so primes colleagues to disregard your comments and makes you sound sheepish about speaking up. Similarly, in the wake of work disagreements, women often seek to further explain their perspectives privately, which can comes across as insecure. To their bosses, I often hear female colleagues justify their absences with long explanations of why a dental appointment is necessary or the importance of a child’s school picnic. It’s simpler and more efficient to just say “I have to leave at x time on Thursday,” and then briefly state when you’ll make up any work responsibilities. No justification necessary.

Luckily, trends in technology may make it easier to operate confidently and independently in the coming decade. Over the past 10 years, one of the largest areas of economic growth has been in the contingent workforce, defined as a task performed on a project or temporary basis rather than on a regular 9-5 schedule. The transition to contingent work has both positive aspects (increased autonomy and flexibility) and negative (income inconsistency). But regardless, it always relies on an individual’s ability to create or identify new opportunities and go after them. Technology platforms that connect contractors with work – like Upwork, Thumbtack, or Etsy to name a few – allow entrepreneurial women an unlimited access to clients on their own terms.

Growth in contract work, reduced transaction costs in finding work or skills as a result of technology, and a new emphasis on self-motivation and entrepreneurship are the defining characteristics of the American economy in the digital age. If we act with confidence and purpose, women are well-positioned to turn these trends to their advantage.

Article by Kristin Sharp for the EVE Program