I am lucky enough to have a day job that is focused on develoing leaders, specifically those who are already making an impact in their community but could have a different impact by running for office. As the President and Founder of New American Leaders, which trains immigrants to run for office, I encounter many people who hesitate to make the leap from community work into the political arena.

Women are particularly conflicted, or perhaps most likely to share the internal conflict they feel. Just in recent weeks, I’ve had several conversations with women who are passionate about running for office but hesitant to take the final step forward. Each of these conversations is rooted in some common feelings – guilt, fear and anxiety.

Often these feelings are intertwined. They require our attention and exploration, but don’t have to be barriers to furthering our leadership goals.
I often advise three strategies that provide a foundation for women to strengthen their resolve and confidence in order to move forward when considering a new leadership opportunity.

These strategies are to:

Trade-offs are a key aspect of any life, and the number of times we have to make those calculations increases as we add more to our plates. The trade off between going to the gym or spending an extra half hour with a loved one, between knocking on voters’ doors or attending a friend’s birthday party.

These are important decisions, and come with no easy answers. Every time we have to make them seem just as hard as the previous time. Sometimes we can find a way to do both.
Knock on doors, then attend the friend’s party. Get up 30 minutes earlier and go to the gym, then get quality time with a partner, child or friend. But often, we have to make hard choices and we have to learn to trust that we will make the right choice for the moment.

The second strategy is to appreciate what our unique skills and talents are for the job at hand. Most often, when we are exploring a run for public office, or any other new opportunity that might be intimidating, the role is speaking to us. That’s no coincidence.
We see something that needs to be done, and we know we can do a better job than whoever may be currently occupying the role. We know we care enough to make the change that is needed. But we second-guess whether we “have what it takes”, whether we are smart enough, qualified enough, ready enough.
Recognizing what we are bringing to the table, and especially appreciating its uniqueness, can go a long way in making us feel ready.

Finally, and perhaps most importantly, we need to own our ambition to make things better for our families and communities. Ambition has become a dirty word, especially when associated with women. But it’s a powerful tool that can drive us to work hard for the change we want in our lives or for those around us.

A community-minded ambition fuels the desire to serve in public life and can help women shape the platform for their campaigns and for governing. It can help women build companies that work on behalf of their employees and their stakeholders.
It can help women fight for better schools and for peaceful communities. Derived from the Latin word ambire, which means “go around” and was used to refer to canvassing for votes, ambition can be a force for good, a quality that women should own and embrace. 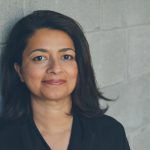 Sayu Bhojwani is the Founder and President of New American Leaders, which is based in New York City and works across the country to build the power and potential of first- and second-generation Americans. She served as New York City’s first Commissioner of Immigrant Affairs and is the founder of South Asian Youth Action, a community-based organization in Queens.

Sayu’s TED talk focuses on the importance of immigrants to American democracy, and her work to build a more inclusive democracy has been featured in The Wall Street Journal and in The New York Times. She has shared her personal journey in The Nation and described her work on Bill Moyers.com. Her book, People Like Us: Knocking at Democracy’s Door, will be published by The New Press in October 2018.

Sayu earned a PhD in Politics and Education from Columbia University and is a Visiting Scholar at Rutgers University and a Woodrow Wilson Visiting Fellow.  She serves on the c4 boards, AAPI Progressive Action and National Immigration Action Fund. An immigrant of Indian descent, she grew up in Belize and now lives in New York City with her husband and child.