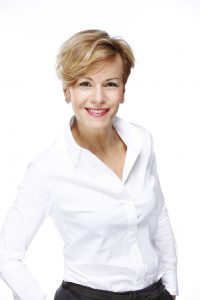 Barbara Lavernos is Executive Vice-President Operations at L’Oréal and a member of the Executive Committee. A year after her noteworthy talk at EVE International 2017, she takes a look back at her career path and gives us a glimpse of her vision of leadership.

You began your career in purchasing. What drew you to that field?

Barbara Lavernos: Chance. I was a trained chemical engineer, but I didn’t want to spend my life in a lab! I applied for a job at L’Oréal, and they offered me a purchasing position. A profession based on technical knowledge, but with a sales aspect, and contact with people both in-house and externally. It was perfect! I learned all about the diverse world of business—different companies and industries. Most of all, I learned that behind every company there is a story, the path of an entrepreneur, passion. I loved that first part of my career.

As a major ordering customer, how did you come to view your responsibility for the economic ecosystem during your years in purchasing?

Barbara Lavernos: I don’t really like the idea of being a “major purchaser”.  It’s true that L’Oréal is a major player for suppliers because of the amounts the group spends on purchases from various suppliers and service providers. That said, I firmly believe in the importance of a partnership relationship between buyers and suppliers. Our suppliers are allies. They are full stakeholders in L’Oréal’s success. I really see us as the leader of an economic ecosystem to which we have certain responsibilities: to be fair and ethical, and to help our suppliers’ progress in areas that are fundamental for our future, such as environmental footprint, social inclusion, and gender equality.

Following your time as Managing Director of Group Purchasing, you stepped through the looking glass to become the head of a business.

Barbara Lavernos: That’s right. As the head of Travel Retail (airport duty-free shops), I became a supplier! I took up a new place at the table and spent several interesting years learning about what we call the sixth continent.

Then you were named Executive Vice-President Operations and appointed to the Executive Committee. Was that a goal you had set for yourself?

Barbara Lavernos: I like managing people. I like having responsibilities and enough influence to change things, so I have a certain degree of ambition to lead my teams to success. But I hadn’t set myself the goal of becoming a L’Oréal ExCom member. Having served as head of Purchasing at the age of 35, I had already enjoyed a good deal of visibility and had the opportunity to act from a young age. I didn’t have the time to become frustrated with any perceived lack of freedom! From there, the most important thing was having jobs where I had enough independence to make a difference and grow my teams and L’Oréal’s business.”

Over the course of your career, have you ever felt like being a woman made you “different”?

Barbara Lavernos: I’ve been asked this question so many times. For many years, I was ill at ease with it because I felt like what made me feel “different” was people always asking me the question, when I wasn’t even asking it myself. I grew up in an egalitarian family. I felt at home in engineering school. I’ve always worked with men without feeling discriminated against. I never felt like I had to fight to prove my legitimacy. And I’ve always had a negative reaction to victimization rhetoric, particularly when it comes to work-life balance (personal choices regarding family organization are obviously key to professional success! My husband understands this and supports me…). Today I see things a little differently. The existence of the glass ceiling has scientifically proven. We have figures and logical explanations. We have identified the mechanisms that prevent women from regularly attaining top positions. It’s much more comfortable to talk about the topic with a thorough analysis than to share one’s own story. As a result, I am much more willing to discuss the issue today. As long as people don’t ask me if there’s such a thing as “male leadership” and “female leadership”. What a ridiculous question!

Even if your story doesn’t tell the whole truth on a social issue, isn’t still it important for you to share it as a role model?

Barbara Lavernos: Yes, we all need role models. I can say so with conviction given that when I held my first management position, the only model of a woman in power I could find was of the bloodthirsty, shoulder-paded working girl. I had no desire to be anything like her. I think it’s important to have a variety of different role models, so that everyone can find their own style, without having to conform to a single norm. For me, part of a role model’s job is to demystify power by talking about his or her experiences, including hesitations, failures, fears, times when he or she was sure things wouldn’t work out…but then they did, because he or she gathered all their courage, dared to take risks, and to brave the unknown!

Do you think this kind of humility, accessibility and simplicity are important qualities for the leaders of tomorrow? What other qualities do you think are key?

Barbara Lavernos: The leaders of tomorrow will first need to ensure the transition from old leadership models to the newer ones expected by younger generations. It’s not an easy task, because the people who are in charge today learned that legitimacy comes from technical skills, that processes are king, and that control is management’s raison d’être. We need to make a real shift, though that doesn’t mean we should do anything in the name of agility: obviously processes are necessary and must be followed, just as skills and expertise are required to succeed with complex projects. What’s different is the way we motivate teams, guide them, help their creativity blossom and stimulate them, the idea of teamwork. Transparency, sharing, loyalty to one’s own values and to the organization’s values, and proximity are critical qualities for positive and effective leaders.

Interview by Marie Donzel, for online magazine EVE. With help from Aurélie Gasnier.