After reading Alexandra Borchardt’s recent column about the continuing gender imbalance in the US media, I’ve realized that current feminist strategies are failing. It’s time to start doing things differently.

“Apart from some laudable exceptions, a generational shift is nowhere in sight. Men dominate almost all subject areas, and the situation at the news agencies AP and Reuters is particularly bad. (…) When the American Society of News Editors sent out its annual diversity survey last year, only 17 percent of 1,700 media organizations responded—an historic low. Apparently, the bulk of newsrooms couldn’t care less,” Borchardt writes.

I’ll admit, I was under the naïve impression that things were moving forward, but it seems gender balance is stuck in the door. This concerns not only media but politics, tech and big business. Namely all the power industries (though media is slipping in revenue, it still commands attention and therefore wields enormous influence). The harsh reality is that whatever got us here, won’t get us there. So we need a new strategy.

The old game is up. We have learned from the many women who tried it that “leaning in” is not our silver bullet. It looked promising for a while there—the science wrapped in Sandberg’s personal story was a neat and appealing package. But in the end it only worked for heterosexual white women from affluent backgrounds, with husbands.

Though this was a disappointment, there’s no sense crying about it. We need to woman up and try new things. I have two ideas about where we might begin.

One—Enough With the Positive Encouragement

Ever since the Diana Report in 2014, we’ve presented solid proof that women in leadership are good for business. Have more women founders been backed? No—we’re stuck at 5%. Is there a rise in women CEO’s of big companies? No, actually the numbers are falling.

The reason that our efforts to rise by appealing to men’s wallets aren’t working is because the argument for keeping women lower paid and under-influential is not rational. It’s unconscious bias, it’s control, it’s the force of habit. Not just in tech and business, but everywhere that is close to power.

Reasoning was definitely worth a try, but since it failed perhaps refocusing from benefits to losses will have more impact. Psychologically, fear of loss is stronger than hunger for gain, so how do we use it?

One way would be by creating an “everybody’s doing it” narrative, to stimulate fear of missing out. In business this carries the risk of getting left behind, losing access to talent pool, and surrendering half the population of clients to the competition. Ouch. In the same way, the risk of losing 50% of the vote can impact politicians and losing audience can sway the media. If attention is our strongest currency in the digital age, let’s pay it to the places and businesses where women are equal.

This is a classic negotiation technique. When talks stall and progress becomes stuck, skillful parties will swap negotiators to get things moving again. A different personality brings the potential for better chemistry which can create a new opening. We can use that.

So far, the negotiators for our side have been academics, activists and role models. Recently, pop culture has also rallied to the cause. The impact of Hollywood girl heroes and pop feminist divas on young audiences may prove formative yet.

In light of that, the new negotiators should be young women with a cross-sectional agenda (who essentially bring every other minority along with women onto the diversity ride) and men who are onboard and can use their experience to build our case.

At the risk of sounding ageist, I think younger women have a better operating system for seeing and tackling inequality.

Older women (I’m including myself in this) fought and gamed the system to make it to where we are. We’re formatted by work and culture in a way that biases us towards maneuvering around the system rather than rebuilding it. (Consider what that implies about older women mentoring down to younger ones within organizations…)

And men. Men need to start talking to other men about gender equality—they have the power to change things to a far greater degree than we do. If we continue to stay corralled in our women’s sections, circles and summits, nothing will change except our levels of frustration.

Actually, if we keep talking among ourselves and not to men, our only shot at equality is revolution. I’m sorry, but being the nice ones who deserve more has never in the entire history of the human race provoked peaceful change. So if we do not want to use force (which we clearly don’t) and logic has failed us, than our only chance in hell is conversion. It worked for the Catholic Church, why not make it work for us?

These are obviously not the only ways to go. My intent is not to set a course but to move the conversation back to the drawing board. Let’s regroup and rethink because things are not getting better and well, we have a world to save (yeah, OK, I watch those Hollywood girl hero movies too). 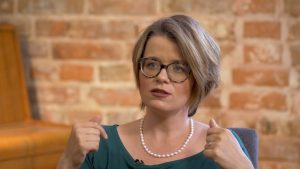 Zuzanna Ziomecka is an American-educated, Polish media maker professionally involved in print, television and internet projects since the beginning of the millennium. She was awarded editor of the year for founding and leading Gaga – the first Polish lifestyle magazine for parents in 2008. She was also one of the few women to ever act as chief editor for a weekly current affairs magazine (Przekrój) in Poland. Currently, Zuzanna works for Poland’s largest liberal daily – Gazeta Wyborcza – where she is responsible for digital innovations for their women’s brand “Wysokie Obcasy”. In the fall of 2017 she launched NewsMavens – a news round-up curated exclusively by women from European news organisations. The project was funded by Google DNI and Gazeta Wyborcza, and currently operates with the support of the European Commission. Privately, Zuzanna has a mindfulness and leadership coaching practice and raises two rebellious kids with her partner in Warsaw.