Jean-Marc Lagoutte, Group Chief Information Officer at Danone, explains his presence at the EVE seminar, what he enjoyed, and what he does at Dan’IS in order to make the gender issue evolve. 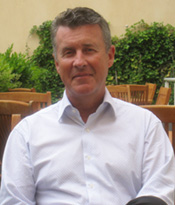 Why did you accept to participate in the EVE seminar last December ?

Because gender equality is a genuine societal issue and because I thought it was important for men to participate: for the credibility of the initiative, to fuel the discussions during the workshops, and to avoid the obstacle of feminism. And also because I have a 19-year-old daughter… I’d like discrimination not to represent an issue in her professional life.

What did you learn ?

Organizing this seminar was courageous, because it was difficult. The difficulty, I think, was to find the right way to handle the issue: you have to know how to raise your voice whenever intolerable inequalities are at stake, without being moralistic or aggressive. The challenge was taken up, the tone was right, balanced, especially thanks to the fact that men were also invited. Besides, it was interesting that there were fewer men than women (20 men and 200 women!) because it made me realize the difference between talking about an issue and actually living it: for the first time, I was part of a minority! However, this experience didn’t represent the reality of the situation because people were relaxed and positive towards men. Finally, the workshops and presentations were of very high quality. Brigitte Grésy, for instance, literally changed my vision of the controversial issue of quotas: first I was opposed, and now I realize that it is far more complex than it seems !

Are there a lot of women in your department? In your opinion, how would it be possible to integrate more women ?

No, there are currently about 22% women at Dan’IS. The number decreases with the seniority of the position (15% are directors, and 1 woman out of 13 people is on the Dan’IS Board).
To fight this trend, we try to raise awareness within the organization: by measuring the number of women, by circulating the results, and above all by commenting them in the different management groups. I also personally shared the details of my EVE experience with the Dan’IS Leadership Team, composed of 50 directors (or equated) of the Dan’IS organization. The women were happy, some men smiled, but everyone heard the message.