A recent study by Pew Research Center has found that we are still clinging on to the idea that there are ​​differences (in skills, working methods and interests) between women and men. And these differences seem to be set deeply in stone because we believe that nature is responsible for them rather than nurture. We look at the findings from this survey, which was carried out on 4,573 representatives of the American population.

Gender stereotypes have it tough 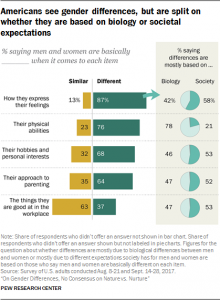 According to 76% of respondents, men and women do not have the same physical abilities. However, this wasn’t even the top ranking perceived difference between the sexes: for almost 9 out of 10 people, what most differentiates men and women is how they express their feelings.

In third place came interests, which 68% of respondents consider to be different depending on gender. Then comes parenthood, which is not approached in the same way by women and men, in the minds of 64% of the American population. But almost the same portion (63%) believe that professional skills don’t depend on gender. 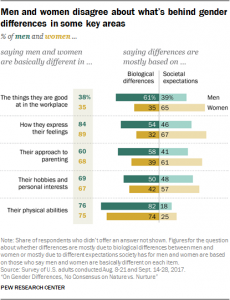 So what’s the reason behind these perceived differences between the sexes? It’s all about biolology for 42% of respondents, who said they believe that women and men do not express their feelings in the same way, while 46% believe that interests depend on gender, and 47% consider that professional skills are gender-specific.

For all issues, the weight of social constructs in how the origins of gender-based differences are understood only just takes the lead ahead of essentialist theories.

Men are more essentialist than women

Men were found to give the most credit to the biological nature of differences in preferences, skills and behaviors between women and men. Almost twice as many men hold it to be true that “gender-based” professional skills are defined by biology!

The belief that the masculine expression of feelings is by nature different from that of the feminine is much more firmly rooted in men than in women. Women always consider that social constructs must be taken into account in order to understand differences between the sexes.

Is morality defined by gender? 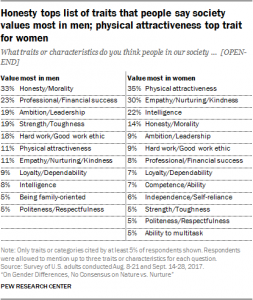 On the whole, those who argue that differences clearly separate the “world” of women from that of men do not see it as a bad thing, and sometimes even think it can be advantageous. Differences between the sexes are prized when it comes to parenthood… And those differences are also acknowledged in terms of professional skills and values.

Men: honesty, professionalism, ambition, the work force… Women: physical appearance (?!), attention to others, gentleness and intelligence. These character traits put pressure on men to succeed professionally and provide for their homes and put pressure on women to be good mothers and stay physically attractive. No surprises in a world rife with gender stereotypes!

It should be pointed out however, that the pressure to conform to the social expectations of gender derives mainly from men to men and women to women: in other words, it is perhaps the internalization of the stereotype that drives a person’s desire to be a “real” man or a “real” woman.

People are happy to deconstruct gender stereotypes… But mainly for women. 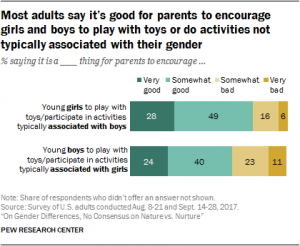 The pressure of gender stereotypes encourages most people to want to deconstruct them during a child’s formative years. But gender differentiation still creeps in, even for those who strive to provide a non-sexist education: while 77% of respondents are in favor of girls being exposed to games and activities that are considered to be only “for boys”, only 64% think it is good to do the opposite with little boys.

Where we find the effects of “differentiating valence between the sexes” It is accepted and rewarding to go towards the masculine, but not in the opposite direction towards the feminine.

What the Pew Research Center study has revealed is certainly the permanence of gender stereotypes in people’s minds, but also their relative resistance to raising awareness. So perhaps in order to liberate ourselves from stereotypes, it is not enough simply to identify them and realize that we are subjected to them as much as we apply them. It also would seem futile to extend to infinity the discussion of the “nature” or “nurture” foundations of views that assign individuals to social functions according to their gender.

The issue is rather about the collective incentive to give each singular individual the chance to fulfil their own potential however they choose. This is the reasoning behind inclusion, which co-empowers everyone in terms of how their positions and actions affect others. While it is probably impossible to eliminate all of a person’s preconceptions, if only because the mechanisms of cognition derive partly from how we categorize the world, the psychosociologist Patrick Scharnitzky (a speaker at EVE) encourages people to avoid allowing them to be used to make decisions. In order to succeed, we need to develop a constantly honed cultural openness that promotes empathy as well as building and maintaining a personal and relational balance that is conducive to taking conscious action.

Marie Donzel, for the EVE webmagazine.
Translated into English by Ruth Simpson.