Diversity policies started out based on gender equality and disabilities. Over the years, other elements have come into the mix, and discussions and specific initiatives have been taken to address diversity in terms of background, generation or even physical appearance. But another form of diversity is more seldom tackled: our brains. Though the subejct has become more accessible as neuroscience has moved forward, cognitive diversity is still poorly understood. The EVE program decided to take a closer look.

What is cognitive diversity?

The term cognitive diversity (or neurodiversity), was first coined in 1998 by journalist Harvey Blume in an article for The Atlantic. It is the opposite number to another term that has emerged in the study of high-level autism, and is to label non-autistic individuals: “neurotypical”.

For people with autism, the notion of neurodiversity has gradually been extended to other areas of neurology that have a direct impact on cognition (all of the mental processes involved in how people learn, remember, interpret situations, etc.).

People with “DYS” (i.e. forms of dyslexia, dyspraxia, dyscalculia, etc.), those with attention deficit disorders or high intellectual potential, as well as those with autism, all have brain structures that are functionally and structurally different from the neurotypical “norm”. In other words, their brains show neurological differences that can be seen on scanning devices, and they process information “differently” from most people.

“Neurodiverse” people have a different cognitive approach from most others. The way their brains function can have a significant impact on perceptions, memory, thoughts, emotions, learning abilities, social or organizational skills, or how they solve problems or make decisions, etc.

The way their brains work is neither better nor worse, it is just different. Neurodiverse people are not disabled and they do not need to be “fixed”. “A cat is not a deficient version of a dog” explains Julie Dachez, who has autism and Asperger’s, “a cat is just a cat”. Atypical cognitions therefore have different strengths and weaknesses from typical cognitions: the ability to memorise may for example be below average, but it may be “compensated” by increased creativity.

However, whether through ignorance or normative pressure, educational and professional environments struggle to identify and assess the benefits of neurodiversity. And their lack of skills, which is quickly pinpointed, sets these learners aside. The result is a huge gap in their learning. It has also been proven: neurodiversity (like diversity) significantly increases performance because it brings in new perspectives, and they can be sources of creativity and value for a company. 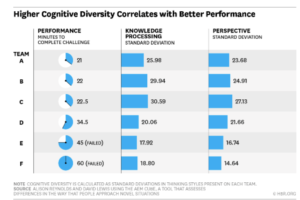 How neurodiversity can be a competitive advantage for a business

Companies would therefore benefit if they learned how to recognize, promote and support these so-called atypical people by offering them suitable positions and tailored environments. A growing number of businesses, such as Microsoft, Ford, SAP and HPE have indeed initiated HR reforms to integrate neurodiversity:

Although these initiatives are still in their infancy, they are already bearing fruit. They are bringing many multifaceted benefits: a better capacity for innovation, an improvement in quality, productivity gains, growing commitment from employees, neurotypical and neurodiverse alike! Because special attention is paid to individual sensitivity and needs, these programs “make it necessary to get to know the person better in order to learn how to manage him or her better” says Silvio Bessa, Senior Vice President of Digital Business Services at SAP. “I’m 100% sure that it has made me a better manager.”

Every single person has their own unique fingerprints. But does everyone have a unique brain? The anatomy of each person’s brains is unique: that was the conclusion of a 2018 study led by the neuropsychologist and cognitive neuroscientist Lutz Jäncke from the University of Zurich.

To validate the hypothesis, the research team observed almost 200 brains using MRI on three occasions over a two-year period. During each MRI, 450 anatomical characteristics were observed, ranging from the volume of the brain to the thickness of the cortex and including a measurement of the volumes of gray and white matter. Conclusion: each brain has its own individual combination of specific anatomical characteristics. We are all cerebrally unique because we are subjected to a variety of genetic and non-genetic influences, such as individual experiences and life circumstances.

We think “differently”, so we are “different”, to paraphrase Descartes with a neuroscientific slant! We are all individuals, so we perceive reality differently and interpret the world around us and the movements of other people in various ways. Optical illusions are a good illustration of how reality is seen and interpreted differently by different people. 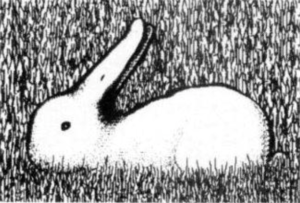 A duck or a rabbit?

Our brains can be biased in a thousand and one ways, so when two brains come together there can definitely be a whole variety of interpretations, and plenty of space for misunderstandings! So how can we manage to understand each other and get along, especially in a workplace environment? 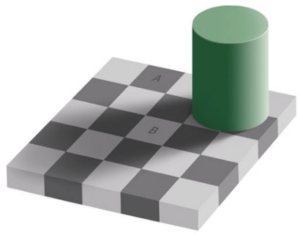 Adelson’s chess board: box A is the same color as box B!

We all think differently, but our brains have two distinct speeds. Let’s look into that. The winner of the Nobel Prize in Economic Sciences, Daniel Kahneman pointed out that we think in two different ways, our minds have two systems: system 1 and system 2. System 1 “works automatically and quickly, with little or no effort and with no deliberate control”, while system 2 “deals with challenging mental activities that require concentration, including complex calculations.”

We’re mostly lazy, and we like things easy. Even if that means jumping to simplistic conclusions and making serious errors of judgment, such as the generalizations which lead to stereotypes. Similarly, we tend to presume that other people think the same way we do. Except they don’t. So there can be a huge gap between our intentions and how they affect someone else. And that’s how conflict arises: “You look so beautiful today, darling…” “What? Do you mean I look ugly on other days?!”. So you might think you’re doing the right thing, and your intention might well be to bring well-being to others, but the impact of your action may have the opposite effect. Ouch!

Learning to manage people who think in different ways…

Interacting with another person means taking their thought system into account and integrating it into your behavior. Logical thinking is therefore more effective when we also bring its emotional counterpart into play. When the two cooperate, we can read a person’s emotions using empathy. That’s the first step in understanding how other people think.

The other lever, which is no less essential, is to transcend system 1 (the one that generates conflicts and misunderstandings due to different ways of seeing the world) and reach system 2 (by bringing in objectivity and creating common ground).

As Jacques Fradin, a physicist, doctor and cognitive and behavioral therapist explains, this transition involves concretely opposing rigidity with an ability to refocus the drifts of simplification with the richness of nuance. It means from the vice grip of certainty having the ability to take a step back, from the logic of empiricism taking a thought-out view that is much more logical. In short, it is about learning to defuse the threats of kneejerk decision-making (fatigue, emotions, mental load and other cognitive pollutants).

Let’s take an example: your colleague gives you the impression that he does not understand anything you are trying to explain to him. Your first thought is to presume he’s acting in bad faith: “it suits him not to understand”. If you move from a system 1 reaction and turn to a system 2 way of thinking, you learn to defuse the process and conclude that in actual fact, unless proven otherwise, you actually have no idea what is happening in your colleague’s brain, and you should perhaps communicate more clearly.

Flex your cognitive empathy muscles and you will learn how to be humble and how to adapt. And those efforts should pay off quickly: once the complexity of reality is overcome, the joy of peaceful relationships is within the reach of our diverse neurons.

Valentine Poisson for the EVE webmagazine. Translated from French by Ruth Simpson.